Channel 4-63 Human Design Logic Channel connects the Parietal and Ajna Center through the Gate of Doubt (63) and the Gate of Formulation (4). The parietal Center creates mental pressure to search for the meaning and purpose of life, is responsible for directing attention. Ajna Center is a Center of awareness and forms fixed ways of processing and analyzing information. As a result, Channel 4-63 is in constant search of questions, to which it then independently searches for answers.
A design of mental lightness mixed with doubt.

People with a certain Channel of Logic are consistent and realistic, they can perfectly solve other people’s problems. They are endowed with a doubting mind, which is essential for finding logical solutions. Such people are characterized by mental lightness and high intelligence, they like to share the conclusions they came to.

The decisions that Channel 4-63 finds are always logical, but it is not at all necessary that these conclusions are true. These are more mental concepts that need experimental verification so that they can then be used in practice.
Also, not all the questions asked by Channel 4-63 are worth puzzling over. You need to rely on your Authority to find those tasks that are worth the effort spent on solving them. 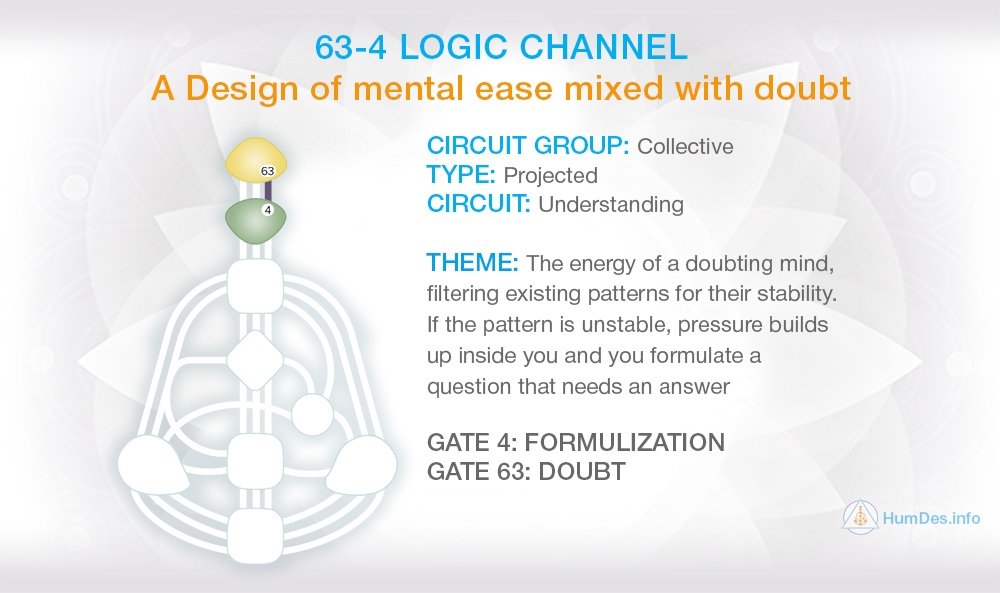 4-63 is the Projected Channel.

If the owners of a certain Channel 4-63 use their mental abilities to serve others, and do not delve into their own lives, then they find their realization in this. For them, it is correct to show their talents after being invited by others.
The Logic Channel sees ways of solving problems that will work not only in the moment, but also focused on achieving success in the future. Channel 4-63 finds those who need his clarity and inspiration if they follow their Strategy.

The Contour of Understanding.

Channel 4-63 belongs to the Collective Group of Circuits and accordingly has a deep need to share knowledge and benefit the community. People with a certain Channel of Logic strive to protect others from erroneous judgments and also share their inspiration. The Channel has no connection with the motor, so it seeks to inspire other people with its ideas, who will put these concepts into practice.
Channel 4-63 shares its knowledge and ideas so that in the future it will lead to a better life for the whole society. If he ceases to be guided by the general and dwells on himself, then he begins to live the False side of his nature. Then the Channel directs efforts to correct and remake itself and its close environment, which leads to a loss of energy and a departure from its purpose.

A look into the future.

Channel 4-63 has a strong visual perception. He looks to the future and constantly considers the likelihood of certain events, this may even give rise to unnecessary anxiety. A person with a certain Channel of Logic has a fear of the uncertainty of the future if he is not able to find a solution to any problem.

But there is no point in worrying too much about what has not happened yet, since experiences cannot in any way affect the future. You shouldn’t fix something that hasn’t broken yet. You shouldn’t worry about what you are unable to change. Channel 4-63 should value the present moment and the people around them more, instead of constantly evaluating and analyzing perspectives.

Despite the fact that the Logic Channel is great for solving other people’s problems, it can severely limit its owner, building concepts that are difficult to get out of.
For example, a person with a certain Logic Channel makes plans for a month ahead and realizes that he will have absolutely no free time. And if during this period invitations for meetings or events are received, he will immediately sweep them aside. He will not understand his desires, because he “knows” that he does not have time for this. Thus, the Channel closes everything that goes beyond the concept and does not see new opportunities.

Only following your Authority and Strategy can remove this limiting influence of Channel 4-63 on the life of its owner. Each element of Design brings its own strengths and weaknesses to a person’s life. By studying your card, you get the opportunity to understand your nature and, without resistance, help her express herself correctly.