Ra Uru Hu was on the island of Ibiza when, from January 3 to 11, 1987, he had a mystical experience, which he described as receiving information from the Voice. It was “The Voice” who told him about the Human Design system, and also told about the changes that await humanity in 2027.

The “Voice” told Ra Uru Hu that the era of humans was ending. The year 1781 was marked by the beginning of the era of the 9 Сentered creatures that you and I are.

7 Centered man (7 chakra) was oriented towards the mind and external authorities. It was replaced by a more advanced and inward-looking 9 Сentered form. Today each of us has nine Centers. The new bodies are designed for a long life span (on average, 84 years, in accordance with the cycle of the Planet Uranus). Living longer is necessary to comprehend and integrate large amounts of information.

So what is Prophecy of Ra Uru Hu for 2027? According to the prediction, in 2027 we will have another transformation, which will lead to the emergence of a new human species – the Raves. These creatures will perform completely different tasks. What do we have to do and how to prepare for a new era, which is less than ten years away?

After 2027, the Solar Plexus Center will become the Center of Mindfulness. Consequently, people born after this year will have a lot of potential for emotional awareness. Ra Uru Hu spoke about the main features of the Raves:

Raves will look like they are disabled (and will be perceived as such by parents at first). In order for the mutation to occur, they must be combined into groups (Pents), combined with each other. Groups of three to five Raves will help them merge into one consciousness, in which they will communicate with each other. It is the moment of merging that will be considered the true birth of Rave.

This shared consciousness will be the structure that will govern each Rave and Penta at the same time. The energy-informational field of their unification will emit and receive frequencies (this will be possible due to the transformation of the Solar Plexus Center). They will communicate in this field, so poor eyesight and speech problems will not interfere with their communication. Together, Raves will be much stronger and more effective than any person.

Interaction of Raves and People

Raves will not be interested in people’s lives. They will be indifferent to our spiritual and material values, they do not need our territory. They will not consider a person either as a competitor or as a partner, as much as possible distance and interacting with each other. Due to limited contacts and lack of mutual understanding, people and Raves will exist as if in parallel realities. 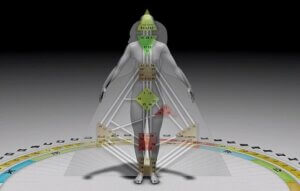 Raves will create their own separate civilization, to which we will be denied access due to a lack of understanding of the processes occurring between them (we will never get access to the world of their frequencies). They will not live like us. The only thing that the Raves will depend on us and people is their birth. After all, it is the representatives of the human species that will be their parents.

From 2027, the world will no longer take into account the interests of people, now it will take the side of the Raves. For example, Raves will not eat animal food, so people will be disconnected from the animal world (people will become vegetarians, pets will run wild, some animals will suffer from previously unknown diseases).

“Golos” notified Ra Uru Hu of the upcoming global disasters of a man-made or natural nature, which we are already witnessing all over the world. According to the prediction, no more than one third of all people inhabiting the planet will survive. The emergence of epidemics is possible: if you study the historical facts, it was they that claimed many human lives. For example, in the 14th century, more than 25 million Europeans fell victim to the bubonic plague epidemic.

In addition, we are waiting for the cessation of attempts to search for God as a higher power, which explains everything and restrains the aggressive nature of man. If a person lives his False Self, and he was protected from crimes only by the fear of God’s punishment, there will be no more obstacles for his dark manifestations.

Many social institutions will be destroyed: there will be no hospitals, they will stop paying pensions, and the number of divorces will increase (we see the beginning of the crisis today). Individualism and consumerism will become the main trends. Interestingly, the forecasts of famous political scientists generally coincide with the prophecies of Ra Uru Hu regarding social institutions. The motto of every person in the new era will be “I am busy with myself and my survival”.

How do we get ready in the new era?

In light of the changes to come, Human Design is the only knowledge that will help transform ourselves through the Living Your Design experiment in order to survive after 2027. We have a unique opportunity to observe the ongoing processes. Thanks to this, we will see a new, unknown to us form of life – Raiva.

By studying his Design, trusting in Strategy and Authority, a person will be able to tune in with his inner navigator. Then, in this stream, he will be able not only to survive, but also to be successful in the future. In these difficult times, when all the usual foundations will be destroyed, only those who know how to make decisions based on inner Authority and which Strategy to follow will be able to stay alive and healthy. My Design is my guide, a logical system that anyone can test for themselves. While we still have time to experiment.

Ra Wuhu Hu said, “This is the time to teach people to be their own authority because the door is closing.” This means that no matter how difficult times are, if a person knows his nature and can trust it, he will always live his life in its entirety, no matter what the world around will be like.