What is nervousness in Human Design? Of course, in the first place, nervous behavior is determined by the Emotional Center, which responds to our emotions, feelings and sensations. However, this is far from the only Center, the mechanism of which can, in some situations, contribute to the formation of nervous behavior in a person.

In this article, we will look at the causes of nervous behavior from a Human Design perspective and how to work out such behavior.

From the point of view of psychology, nervousness is an increased emotional reaction of a person to certain external factors, which, in terms of the strength of their influence, usually do not correspond at all to the effect produced. In other words, the reaction of a nervous person from the outside seems strange, inadequate and does not correspond to reality. Very often, such a reaction is associated with an unstable emotional state of a person. In turn, the reasons for this behavior can be very different. Often, unstable emotional behavior is preceded by unspoken emotions or desires, unlived pain, unexpressed sensations that can accumulate in the body for years or even decades. 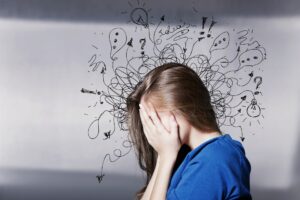 If a person does not work with their emotions, nervousness will only increase. And over time, it will be extremely difficult for him to calmly communicate with others and live an ordinary calm life. Conditions such as depression and anxiety are often companions to nervousness.

If nervousness becomes permanent, it can become the cause of various psychosomatic diseases.

Now let’s see how the mechanism of work of the Emotional Center can contribute to the manifestation of nervous states in a person. First of all, the following should be noted. People with a certain Emotional Center are more susceptible to the state of nervousness. For such people, one of the key concepts is the so-called emotional wave. How does this concept manifest itself in life?

When a person with a specific Emotional Center tries to make a decision, being at the peak of an emotional wave, he feels joyful and cheerful. In this state, he is literally capable of moving mountains. And being in this state, he makes some kind of decision. However, after a few minutes, he may find himself on the decline of the emotional wave. In this case, his decision may be completely different. And from the outside, such behavior will look completely inadequate, overly emotional and even neurotic.

Now let’s look at how the mechanism of the Root Center can be the cause of nervousness.

A person with a specific Root Center can rarely sit still. He needs to be constantly in an active state, to act, initiate, etc. However, this behavior is far from always correct and can lead to incorrect spontaneous decisions. A person makes such decisions, ignoring his own Strategy. And all because he simply cannot sit idle and it seems to him that his life is passing him by.

So, for example, a Generator with a specific Root Center, which is absolutely contraindicated to initiate, being unable to be absolutely impatient, may decide to get a new job: again, so as not to sit idle. However, after a week, when the job disappoints him and he has a feeling of frustration, he may decide to quit. And so on in an endless vicious circle. From the outside, this behavior can also look inappropriate and nervous.

Whatever the true reasons for the nervous state, our main task is to give ourselves time in any situation and follow the Strategy and Authority. So, for example, making a decision, being in a state of emotional calm, a person with a certain Emotional Center can calmly assess the overall picture and make an adequate decision regarding the current situation. And this will relieve him of further regret, guilt, and an unstable nervous state.

It is the same with those who have a Root Center. If a person gives himself time to calm down and wait and, as an option, gives a safe outlet for his adrenaline energy (sports, dancing, etc.), then he will have the opportunity to listen to his Inner Authority and feel which decision will be correct in a given situation.