One of the main problems of modern mankind is the universal standardization. We completely disregard the differences between people, trying to fit everything into a common template. This especially affects the sphere of education, where the unique nature of each child is ignored, and everyone has to play by the same rules. According to these rules, someone is given a game easily, while others have to step over themselves, trying to adapt to the system.

In this article I will try to briefly cover you with such a topic as the concept of Left and Right Mind in Human Design. This is a very useful material that will help you not only in the upbringing of your children, but perhaps you will allow you to understand yourself much better.

So, as you know, the human brain is divided into two hemispheres: left and right. If we do not go into details, we can say that the left side is responsible for material, strategic, analytical thinking. At the same time, the right side determines the ability of a person to imagination, fantasy and creativity.

In Human Design, too, there is the concept of left-rightness of the mind. You can see this indicator when calculating your Bodygraph, in the tone of the Sun’s personality. Specifically, we are interested in the upper right arrow located near the head. 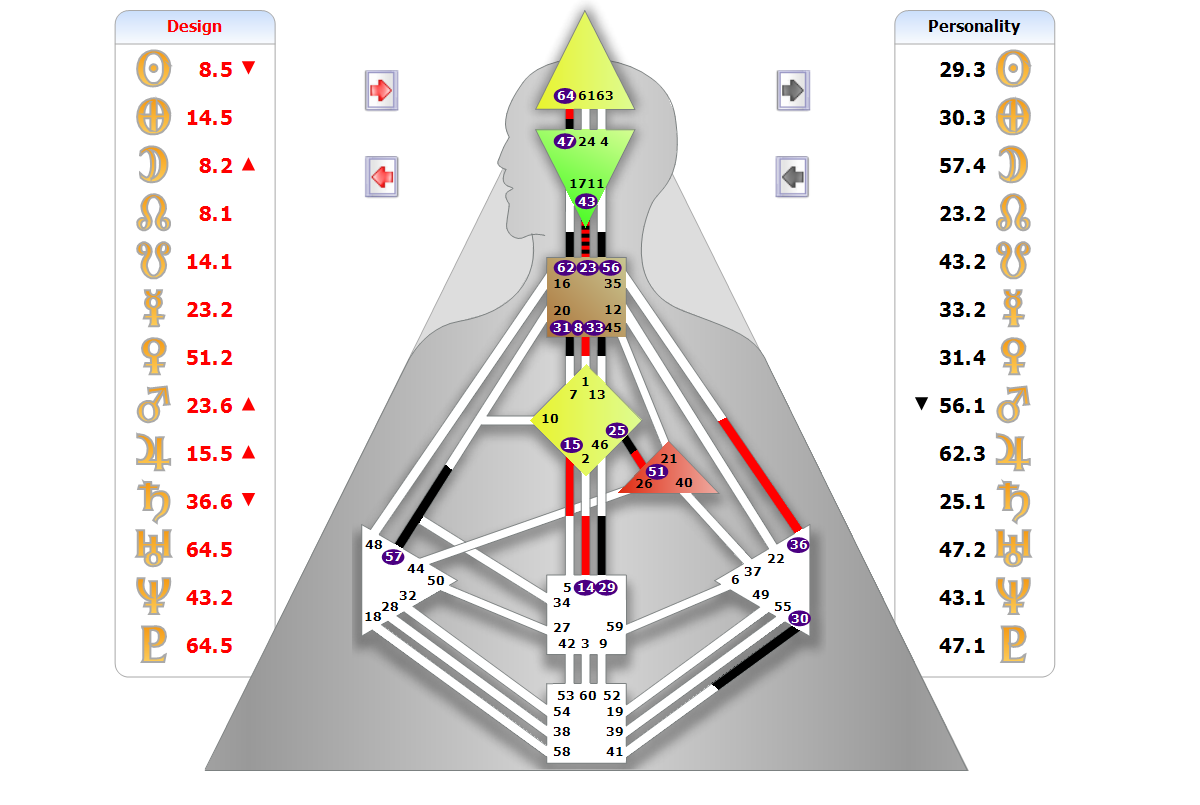 In this screenshot, the arrow is turned to the right, which means that the bodygraph of a person with a right mind is depicted here.

It is worth saying that initially man (as well as any other animal on Earth) was designed exclusively as a “right” creature. Neanderthals lived perceiving the world around them, but not analyzing or planning what was happening to them.

Over time, for a number of factors, our mind improved, and humanity gradually moved from right to left, turning into strategic beings. This was the era of the development of mankind, when, due to the rapidly developing mind and collectivism, our family literally “captured” our planet.

When the conditions for a more or less comfortable life became available, the person moved to the “hybrid” phase, when he could be both a left and a right creature. The same thing continues to this day – both parts of the mind are developed in us, only one part always prevails over the other. Someone is given easier strategic thinking and logical patterns, while others, on the contrary, are much easier to think in an abstract way, using their imagination.

Returning to the modern education system – it does not work. Rather, it does not work equally effectively for everyone. How can a school teacher recognize the creative potential in the child when both the teacher and the student have to work on a pre-planned and verified education program?

And for the most part, problems appear in children with the right mind. It is much more difficult for them to concentrate on boring and routine memorization, which is easily given to children with a left mind. Teachers and parents baptize right-wing children not too smart, and children with a left mind are called too prim, devoid of imagination. One way or another, such “programming” becomes the foundation for many psychological problems.

Globally dealing with this problem is almost impossible – you have to change the very foundation of the education system, experimenting, trying to find the right approach for each person. But we can do only that little for this world that we are capable of. Namely, to show this information to each familiar parent and teacher so that they can in practice change their approach to teaching their children.