Conflict between G and Ego Center

What is conflict between G and Ego Center? How often do you have a desire to figure out who you are? Would you like to become someone completely different? How often does your “want” and “need” conflict? In Human Design, this behavior is explained by the contradiction between the Ego (Heart Center) and the G Center, which causes complex psychological problems and destroys health.

A conflict of interests may arise between the Ego, our will, and the G Center, which contains the Magnetic Monopole – a kind of “GPS-navigator” of our essence and destiny. This disrupts internal homeostasis at the psychosomatic level and leads to general psycho-physical discomfort and weakness.

A person begins to strain unnecessarily and ask himself questions: “Who am I?”, “Who do I want to become?”, “Why am I not what I want to be?” – and is in an irritated state. Those who are engaged in psychotherapeutic activities know how far a person can go in self-destruction. In especially advanced cases, the confrontation between the Ego and the G Center leads to cancer – the body destroys itself. This is a fairly common problem these days, which can still be understood and resolved.

As you probably know, there are two types of gates in each Center. The former, like sensors, collect information, the latter, like microprocessors, determine which processes are optimal in a given case, and launch them. In the G Center, gate 10 is responsible for triggering behavioral actions or reactions (reflexes).

Unconsciously (in the Bodygraph it is red) activated 10th gate is a big problem for a person. His body is completely independent of the mind, it has its own will and its own behavior. Actions start by themselves, and a person cannot consciously control them.

If a person with an unconsciously activated gate lives, obeying the will of the body, he can be completely healthy and happy. He sleeps when he wants, eats when he feels hungry, tries to avoid discomfort and behaves directly, with minimal control of emotions. He does not strive to become someone else and is in complete harmony with himself. Alas, as soon as such a person finds himself in a situation associated with restrictions, the imposition of someone else’s will, tension arises in his body. This is especially pronounced in work, when a person is forced to adjust his natural schedule to the office schedule, observe the dress code, restrain emotions, interacting with bosses or clients. The situation is even worse when a person himself wants to meet certain external criteria: to be “successful”, positive, overly active, because this is encouraged by society. 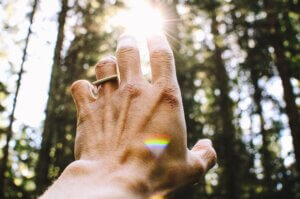 The problem is, for most people, the Heart and G-center don’t get along well with each other. The heart center is responsible for your ego, interaction with others and the desire to become one who would correspond to the ideas of others. The G-center is responsible for self-love, self-understanding or, on the contrary, ignorance and the question: “Who am I?” If there is a rift between the Ego and the G-center and they contradict each other, the person says to himself:

“I don’t like being who I am and I want to be different.”

In support of this imperative, the ego tries to change the very essence of man. And since this cannot be done, the whole body and its immune system take the whole blow. The Heart Center and Ego trigger processes that harm the body and lead to unnatural reactions. The G-center also launches its own protective processes, and the body begins to fight with itself. Of course, this struggle does not go unnoticed, and over time, autoimmune diseases and cancer develop.

How to avoid internal conflict

Without trying to become someone else and accepting your individuality, you allow your body to function naturally – the way it is designed by nature. The power of the G-center, coming out of the 10 gates, is spent on protecting the body from foreign influences. Energy freely enters life through the peculiar behavior of the body, without encountering resistance from the Heart Center, and performs its functions.

In this way, you unite the Heart and G-center. And since the second contains the Magnetic Monopole, which, like a driver, controls the trajectory of your life and development, then you will follow your path much easier and faster.

There is only one way to get away from internal tensions and contradictions: you need to realize and accept your individuality, directing the willpower emanating from the Ego to maintain something more valuable within yourself. Look within, beyond the Ego, accept your true self and do not try to change it. She already changes as needed.

Studying Human Design allows everyone to get behind the veil of their usual worldview and discover in themselves those features that will allow you to reduce life resistance by an order of magnitude. Decoding the Bodygraph greatly simplifies the ability to separate the present from the artificial in a person, whether you yourself or someone else.