Let’s talk about the aura and the so-called auric interaction. We have already dealt with such a topic as the aura of Types. Depending on which Type you belong to, you will have a certain aura. However, this concept is associated not only with Type, but also with other features of your Design. Each stroke of your Bodygraph somehow leaves an imprint on your auric space.

Let’s say you are a Generator and your enveloping aura. However, at the same time, you may have Projection Channels, which means that at times your aura may be focused. Or let’s say you have a Gate that forms the Manifestor Channel. This means that in some of your manifestations you can make a repulsive impression on people.

What is Aura and how can it be explained

From the point of view of physics, a person’s aura is formed due to the frequencies that his body emits. The world that surrounds us is the embodiment of various vibrations. And our physical shells also produce these vibrations. The vibrational characteristics that reflect our bodies define our aura. Each person has their own auric space and it has a certain intensity. Some modern scientists are even trying to build technical means for detecting and registering human aura. 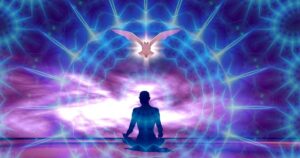 Some sources talk about such a concept as auric synesthesia. What it is? In short, this is a set of features of human perception, in which the recognition of a personality image is accompanied by color sensations. And the aura of a person is also always colored in a certain color (there are five auric colors depending on the Type). This means that there are people among us who are able to visually recognize our auras.

Be that as it may, if each of us has our own specific aura, then when two people meet, we can talk about the so-called auric interaction.

How does auric interaction work?

Even if two strangers walk past each other and do not start a conversation, they still exchange energy in one way or another. And we can also talk about the intersection and overlapping of their auric fields.

Surely, it happened in your life that you see a person for the first time, and you feel uncomfortable next to him. Or vice versa, it is very cozy and good. Where do such feelings come from if you did not even have time to get to know our counterpart? Everything happens through an auric interaction. You don’t even need to start a conversation with a person in order to feel the influence of his aura. It is enough just to approach each other at a distance of one hundred meters. And at least once to look into each other’s eyes.

There is an opinion that one cannot judge a person by first impression. However, the problem is that the first impression is directly related to the person’s auric field. If we are uncomfortable with someone, perhaps there are some peculiarities of our auric interaction. And if we ignore these feelings of ours and continue to communicate with the person, then the Mind will make us believe that this person is good and we have nothing to fear. However, when something happens that confirms our first impression, we say: I didn’t like it right away …

So here’s some advice, dear readers: trust your first impression and try to read as much information as possible, not only on the verbal, but also on the auric level. If you practice this constantly, you will make amazing discoveries for yourself over time.