How do Ajna and Crown Center interact? What is Crown Center? In fact, this is the place where our mental inspiration and our questions to this world are born. The focus of curiosity, active mental energy and the inability to sit still just like that – without studying anything and without making any important discoveries for yourself. It is thanks to the Crown Center that we learn with such interest how this world works, ask questions and try to find answers to them, get carried away by esoteric teachings, various theories and concepts, the Human Design system – in the end. If the Crown Center is defined, then Ajna is also defined , which means that at least one of the three Channels is present in the person’s Bodygraph:

What does this mean? The fact that a person not only has the pressure and inspiration to study something, but also has a fixed way of thinking and interpreting the information entering the brain. Let’s take a look at one example. Let’s imagine that a person has a Channel of Awareness. This means that he is madly carried away by the secrets and secrets of this world. Esotericism, mystical teachings, mysteries of history – all this, most likely, haunts the carrier of Channel 61-24. And thus in his head (namely, in his Crown Center) questions are constantly being born. 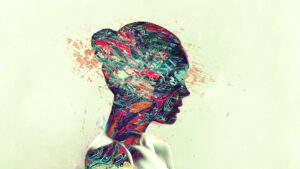 For example: “Why are some people happy, while others hardly squeeze a smile out of themselves?”, “Why is the sky so clear in spring?”, “How does the human body work?”, “When human life will be possible not only on Earth, but also on other planets? ”. When a person with Channel 61-24 is looking for something that will interest him, he experiences incredible inspiration. And when he finds something similar, then his Ajna Center is already involved with his ability to find rational answers with the help of the 24 Gates to mystical questions. And sometimes he even manages to realize something very important for its owner: to unravel some secret. And this is a real triumph and success for him.

But what should a person do if the Crown Center is not defined, but at the same time there are activated Gates in it? Take, for example, Gate 61, which is involved in the formation of Channel 61-24. This is the Gates of Mystery – those that charge a person with interest in everything secret and unknown. If they are present in the Bodygraph, then their bearer will feel pressure to investigate something mundane or mystical, as well as unravel various mysteries. However, since there will be no Channel in his Bodygraph connecting the Partial Center and Ajna Center, sometimes he simply will not know what to do with this very pressure from the Partial Center.

And if he is at the mercy of his False Self, there is a possibility that he will jump from one theory to another, constantly study some literature, read esoteric forums, etc. – and all in order to look more confidently. At the same time, somewhere in the depths of his subconscious, the thought will ripen that solving something important, some kind of secret that haunts him, is not enough for him to finally begin to live his life according to the most interesting and exciting scenario. At the same time, his real life can literally pass him by, since he will be immersed in some secrets and riddles all the time.

In this case, the most obvious (not simple, but obvious!) Solution will be the following. A person who is unable to cope with the pressure of his open Crown Center must learn to at least temporarily reduce the activity of his mental process. Just plunge into mental relaxation and think as little as possible about what most often occupies your thoughts. To be able to stop yourself in time in moments when the mind takes over life. There are different techniques for this and you can choose for yourself what suits you personally. For example, you can do breathing practices, dynamic meditation, do yoga, or just sit still and look at one point. There are quite a few options – try experimenting with them. The main thing is for you to catch this very silence in your head.

However, you cannot remain in a meditative state twenty-four hours a day. Sometimes you will have to indulge in your research and solve mysteries. But it’s better if you do it in a company with like-minded people. Set aside some specific time for yourself to solve mysteries. For example, you can visit an esoteric club or read relevant literature, discuss topics of interest on the forums and with experts every Saturday evening. On the rest of the days, just live your life and try to think as little as possible about the universal secrets.

Another way that will probably help you deal with the pressure of the Crown Center is to take it as inspiration and try to transform it into some kind of creativity. For example, you could write articles about the mysteries of human psychology and publish them on your blog. Perhaps over time you will have accumulated material for a whole book and you will be able to publish it in electronic form. Think about it at your leisure. All this is not as difficult as it might seem at first glance.

The main thing is to follow the Strategy and Authority, do not succumb to the influence of the False Self and do not let secrets take over your nature and your life.