The design of a person with Channel 9-52 Human Design Concentration Channel is different in that its owner can bring clarity to the most chaotic process. Focusing on details is a unique ability of such a person.

The Channel of Concentration connects the Root and Sacral Centers.

Gate 9 – The focus gate, it concentrates on the details. Gate 52 is the Gate of Immobility, which in turn gives the 9 Gates the necessary energy to focus. The peculiarity of Channel 9-52 is that they create maximum concentration and focus on small things and details, but at the same time they are not tense and can see the entire object under study. Gate 9-52 has a Purposeful Design.

This Channel is a formatted Channel, that is, it makes all the other Channels manifested in the map to be activated and fully revealed. 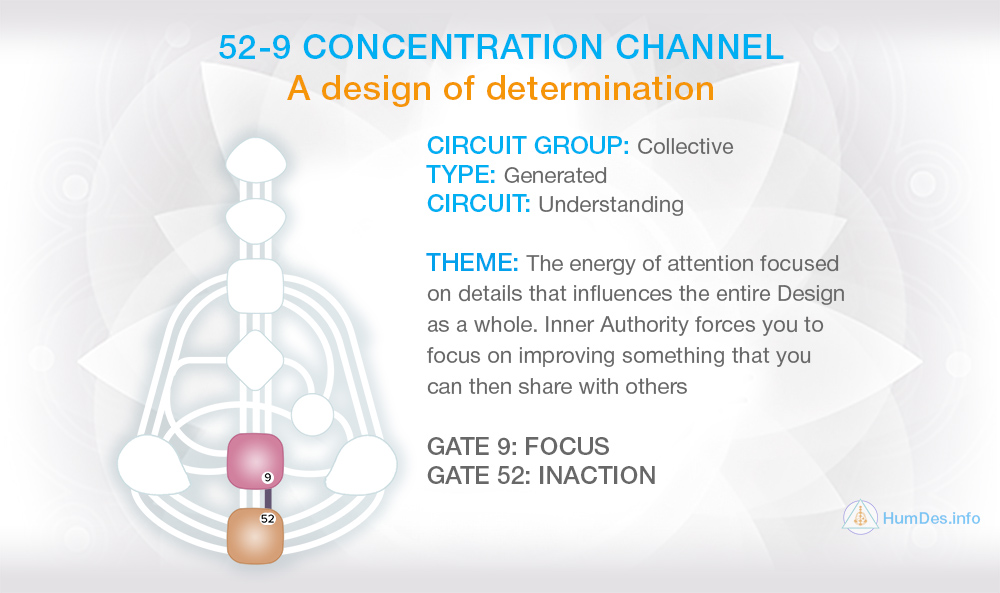 The owner of the Channel of Concentration 9-52 has an unusually logical worldview. Ideally, such a person always tries to use concentration to improve something, to change the world as a whole. People with a specific Channel of Concentration are born so that everything they do has maximum Focus. For example, if you place a person with Channel 9-52 in a group of people who are completely dispersed, even in this case, the Channel will manifest itself, and the person will bring concentration to the work of all members of the group.

Due to the fact that a person with Channel of Concentration 9-52 constantly focuses on details, he manages to stay in the so-called “here and now” state.

Also, people with Channel 9-52 Human Design have a pretty strong aura into which they manage to immerse other people, literally forcing them to pay attention to the details of what is happening. Accordingly, those whose Channel of Concentration is unconscious or not defined at all, it will be useful to be in the company of the bearer of the Channel of Concentration.

A person does not always fully define the Channel, only one of his Gates can be defined. In this case, the essence will be revealed in such a way that a person will subconsciously seek from the outside for qualities inherent in those Gates that are not defined for him.

Channel of Concentration people are simply not designed to do several things in parallel. We can say that multitasking is not about them. In the activity of such a person, the main thing is the quality of the process, and not the number of simultaneously performed tasks. Therefore, the carrier of Channel 9-52 can safely designate in his resume such characteristics as efficiency, dedication, high concentration, but there is no need to talk about multitasking.

A person with a Channel of Concentration must act on the response of the Sacral Center, only in this way life patterns will be lived or corrected correctly. If you follow the response, the chances of a happy and fulfilling life are very high, in contrast to the False Self scenario.