Your intuition is your helper and protector. Channel 34-57 Human Design has Archetype Design. Follow your inner response and then an incredible flow of energy will open up for you to apply in life.

Channel 34-57 Human Design Power Channel connects the Sacral Center, which is responsible for life energy and sexuality, with the Splenic Center, which is responsible for intuition, health and fears. Communication is through Gate 34 of Power and Gate 57 of Intuitive Clarity. The Power Channel is a kind of archetype of human personality and its power. The design inherent in this Channel is called Archetype Design.

The energy of the Sacred Center, through a response, helps the Channel bearer to strengthen his natural, intuitive abilities for survival and warns of possible danger through impulses and reactions supplied to the body. The Sacral Center is located deep in our body. That’s why it’s so important to listen to what it tells us.

Holders of the Channel of Power are naturally gifted with a unique ability to sharpen the perception of the moment in which they are. This adds awareness to them, they almost always know how to act in a given situation thanks to their intuitive awareness. Owners of the Channel can really rely on intuition in many ways – it will not let you down. It so happens that the internal energy of a person, which he receives from the Channel of Power, literally pushes him to be an Archetype, to play his natural role of a strong person. If the owner of the Channel for some reason chooses a different scenario (a weak person), he simply does not receive the inner sacred response that should be with correct living, when making decisions in accordance with his Strategy and Internal Authority. 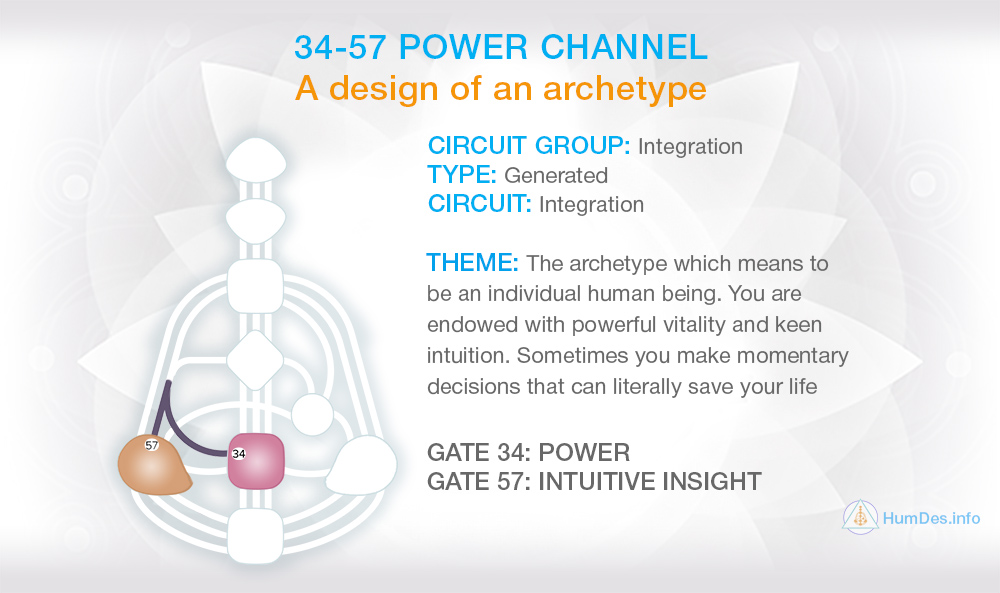 People with a manifested Power Channel are especially sensitive to various sounds; they subconsciously respond to various acoustic vibrations that are inaccessible to most other people. But, it should be noted that the reaction comes only to those signals that carry something positive, calm, and safe for the Channel owner.

As a rule, the owners of the Power Channel are very independent, independent. But from this they are often not ready even for the most objective criticism and other people’s advice coming from others. But, it is worth noting that the person himself who has the Power Channel (if he lives his nature correctly) will also not impose his opinion, position on anyone and try to change his partner.

Such people can accumulate their energy for a long time in order to direct it in the right direction at the right moment. For example, in some kind of emergency or emergency that requires common sense and cold mind, they can take the initiative into their own hands. While others will beat in panic and hysterics.

If a person stops responding to his inner sacred response, decides to go some other way, different from what the body offers, he is covered by a huge flow of various information. In this case, the owner of the Channel simply stops responding to all signals of intuition, which prompts, guides and saves him from many troubles with correct living and responding.

The positive qualities inherent in the owner of the Channel of Power, under the pressure of the False Self, can manifest themselves in a completely different light. For example, strength and independence can develop into uncontrollable authoritarian behavior, and the desire to stick to your point of view can become endless stubbornness.

Studying your Design not only from the position of positive manifestations and qualities, but also in the context of the False Self. After all, it is precisely this design that can significantly disrupt the correct course of life.