Communication occurs through the 7 Gates of the Role “I” and 31 Gates of Leadership. The energy flowing out from the 31 Gates located in the Throat Center gets into the 7 Gates of the G Center, thereby the incipient understanding of the direction receives verbal expression.

Leadership design in good and bad

Channel 31-7 carriers are literally created to become elected leaders. The key is the chosen ones. Self-proclamation is unlikely to be successful. Recognition is the key to Alpha Channel 31-7’s success. As paradoxical as it may be, the more resistance the bearer of the Alpha Channel puts up in recognition of the leader, the better the leader he becomes. The term of leadership of the representative of Channel 31-7 is determined by the society. As long as others are interested in and close to the position of the leader, he will remain so, as soon as for some reason his authority falls, the people choose another significant figure. Therefore, once you find yourself in the right path of leadership, it is important to feel the mood of those who follow you in order to stay on the right wavelength. In other words, the recognition received must be warmed up in order not to lose authority, this requires a lot of patience. 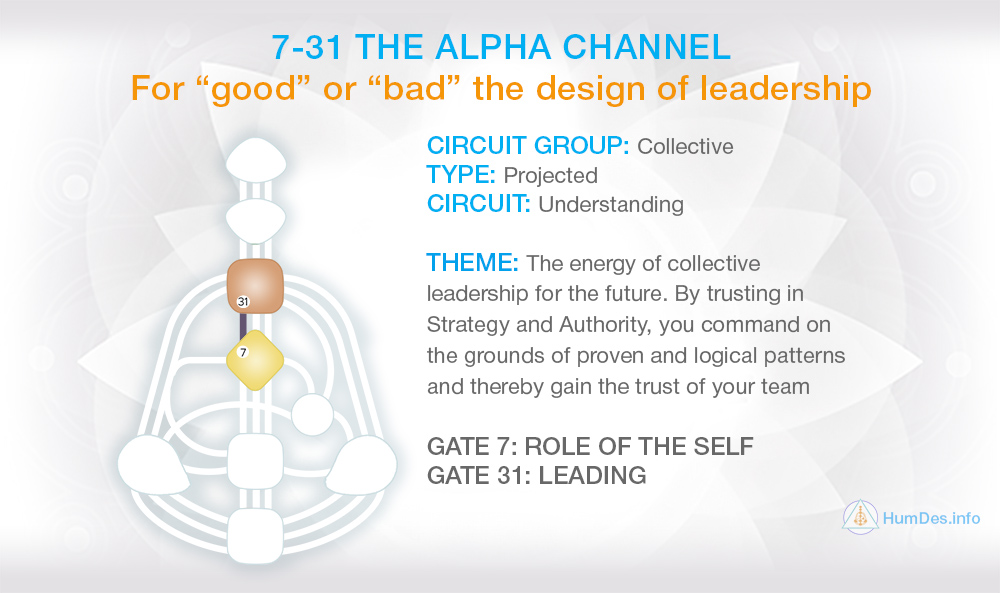 The manifestation of this Channel has two extremes. A recognized leader can turn into a dictator, and both his adherents and himself will suffer. And in the case of incorrect living of life patterns, when the true potential of a person does not have the opportunity to unfold and is eternally suppressed, the owner of the Alpha Channel can turn into a so-called gray mouse.

Alpha representatives, by nature, do not tolerate submission. Particular difficulties in interaction arise when the 31-7 leader falls under the subordination of the same leader, for example, following the subordination in the work collective. This should not be so, and it is unlikely that anything will come of this subordination at all. The realization that an attempt to obey the same leader is an incorrect path does not always come to a person with an Alpha Channel right away. If Alpha Channel 31-7 is unconscious, then its owner only through the accumulation of experience and wisdom begins to realize his correct living as a leader.

It so happens that a person with Channel 31-7 feels his potential, but cannot manifest it due to suppression by another leader previously recognized in the team. Being in such a state can lead to frustration and the living of the False Self. In this case, it is important to recognize your condition in time and take bold steps in order to change the team or open your own business, where leadership qualities can be shown, and not suppressed.

The range of professions in which a person with a specific Alpha Channel 31-7 can be found is quite extensive. If we analyze the statistics, it turns out that many elected historical figures, as well as deputies or presidents, can most likely have such a Channel.