You are born to be responsible. Channel 27-50 Human Design Preservation Channel Human design empowers you with the role of a caregiver. You are inclined to show concern for others and this is sorely lacking in our world.

The Preservation Channel connects the Sacral Center, which is responsible for life energy, sexuality, perseverance, with the Splenic Center, which is responsible for intuition, safety and progress. The connection of the Centers occurs through 27 Gates of Care and 50 Gates of Values. The name 27 Gates already speaks of what quality they endow their owner. 50 Gates, on the other hand, add peace and order to care, and their connection is a very positive set of qualities that affect the way of life of the owner of the Channel, his values ​​and behavior in relation to others. The channel is endowed with the Guardianship Design, which can be seen from the description of both gates.

Holders of the Preservation Channel are responsible for something throughout their lives. It’s not an easy burden, it’s just that Channel Design implies that these people tend to take on this responsibility. Not all channel carriers come to this immediately, but over time, circumstances develop in such a way that a person decides to become responsible in his actions. 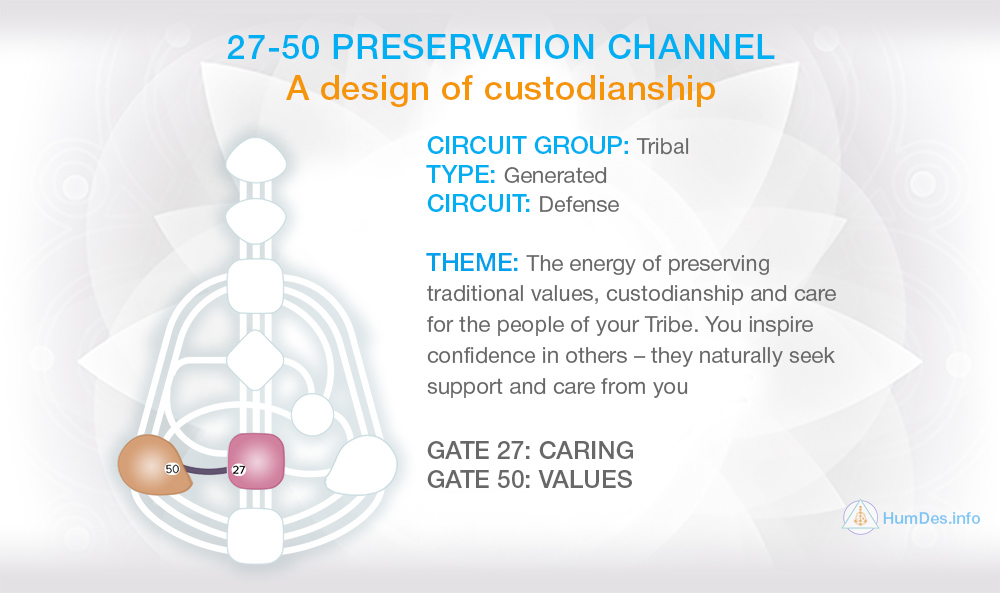 People with a manifested Preservation Channel are distinguished by their special aura, to which other people are drawn. Others may feel that being next to such a person, a certain sense of calmness comes to them. Many see the owner of the Channel as a person who can help, save, take care. And so it happens, a person with a Channel of Preservation can really influence the behavior of others and directly or indirectly help them make decisions. Owners of the Channel often apply all their best qualities in the professional field, they make good medical specialists, teachers, educators, administrators, guides, beauty masters, in other words, all professions related to all kinds of help and care for others are suitable for them.

If we consider people who have the Channel of Preservation, on the other hand, thanks to their qualities, they become understanding and sensitive spouses, and infinitely loving, caring and responsible parents.

Of course, such maximally positive manifestations of the Channel are possible if its owner lives his Design, which means that he acts in accordance with his Strategy and Inner Authority.

You can see that being in the state of the False Self, the owners of the Channel begin to surround other people with excessive care, while they can completely forget about their interests and priorities, placing on themselves an unbearable burden of responsibility for others. And in general, the False Self turns all the best qualities inherent in a person into their opposites. Even the most loving, understanding, calm and sympathetic parent can turn into a tyrant. The False self can also manifest itself in the form of egocentrism. For example, a person begins to do good, and he does it only when he sees some personal meaning or benefit in it. At first, the desire to help may seem quite sincere, but after that, the person asking for help understands that the owner of the Channel expects reciprocal gratitude from him, and not just in the form of “thank you”.

And on the other hand, the owner of Channel 27-50, being convinced of certain things that, in his opinion, are valuable to people, will impose in an imperative manner, regardless of whether these beliefs are suitable for a particular person or not.

If a person knows his Design and begins to understand that some opposite processes are taking place with him, he can recognize that this is the influence of the False Self.It should be noted that the carriers of the Channel, who have taken possession of egocentrism, very rarely notice that something is wrong with them. So. In general, a person may even like such a model of his own behavior. But, you need to understand that it is not correct for him. Most often, the influence of the False Self is noticed by those Channel owners who, due to their desire to help everyone, become victims themselves. Such people begin to realize that something is wrong when they can no longer pull everything that they have put on their shoulders. Such a manifestation of the False Self in the form of a complete loss of oneself while wanting to take care of others is the most destructive for the owner of the Channel of Preservation, in contrast to egocentrism.