Channel 17-62 Human Design Acceptance Channel in Human Design belongs to the group of collective circuits and is responsible for the manifestation of logic. The Channel of Acceptance connects the Throat Center and the Ajna Center, therefore, all thought processes in the head of a person who has such a Channel are processed by logic. The Channel carrier tends to easily form a picture of what is happening without much detail or detail. This result is achieved just with the help of logical connections. The Organizational Being’s talent is the purpose of this Channel.

Description of a person with Acceptance Channel 17-62

Channel 17-62 forces its owners to be quite straightforward in their statements. Knowing this feature, a person can avoid some conflicts by stopping in time. It is important to understand here that, as such, the opinion of a person with a certain Channel 17-62 has a significant value for those around him. But if a person goes too far in his statements, then his opinion may lose credibility.

The carrier of the Channel of Acceptance 17-62 from birth is inclined to study, master and present independently understood material to other people. We can say that he is endowed with the gift of mastery. Such a person easily studies any complex structures and can explain their essence using the example of life patterns.

Empty controversy is not inherent in the Acceptance Channel. Therefore, when a person with Channel 17-62 enters into an argument or takes up criticism, it is best to approach the dispute constructively – by holding debates, or by clearly arguing his position.

A person with a certain Channel of Acceptance should always subject to logical comprehension the correctness of life patterns and the rationality of his doubts. The mind of a person with such a Channel is looking for facts everywhere in order to analyze them later and form a not unfounded picture of the world in his head. 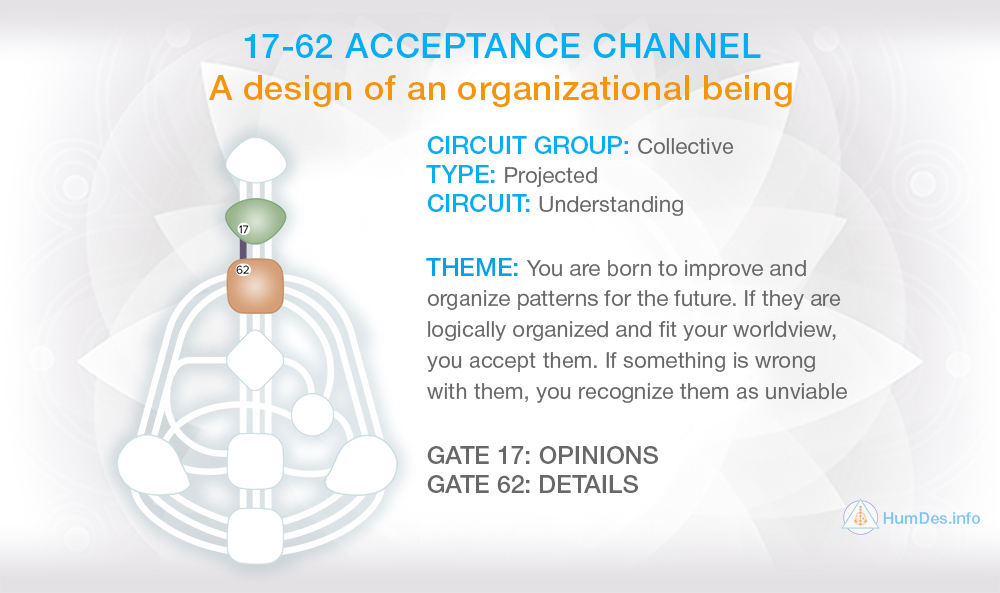 Such people are not bad organizers, but they can only organize what they understand. It is not enough for the owner of the Channel of Acceptance to understand something, he needs to see. The mechanics of expressing thoughts in the carrier of Channel 17-62 is that the Channel transforms thoughts into voice. That is, by expressing his thoughts, a person literally translates a picture from his head into the head of his listener.

Channel 17-62 Human Design consists of the 17 and 62 Gates, which together define its mechanics.

17 Gates are responsible for finding the best strategy. The owner of such a gate has been trying all his life to compose the most correct life pattern for himself in order to find peace in it. As a rule, this succeeds, but not without the help of Gate 62, which are responsible for the details. It is impossible to build some kind of working scheme, business plan, without going into the details of the project. So it is with life concepts. Throughout his life, 17 Gates kept in the head of their owner various life patterns, strategies, thoughts, ideas. When the 17 and 62 Gates are combined, the latter process all the information collected by the 17 Gates and translate it into a public, ready-to-say format. Sometimes the owner of Channel 17-62 may think that his statements are very complicated and not everyone around him understands. This can lead to a state of Frustration.